It’s been so long since I’ve posted to this blog, but I’m gonna give it another shot.


I recently joined Artsy Mama’s Sweet and Sinister - Best Halloween Ever Swap. After I was assigned a swap partner, Mandy, we emailed back and forth and exchanged blog information. I teased Mandy that she needed to get to blogging because she never posted anything on her blog…I mean not one post! Of course, I told her I didn’t have room to talk since I hadn’t posted anything on my blog since March, and I needed to do the same.
Well, Mandy has decided to try blogging every day for the next six months (her blog is here) and she has been keeping it up too! So Mandy has inspired me to post again on my blog. I can’t say I’ll post something every day, but if I get something done once a week, I think that will be a great start.


Today, I'll share a funny story about a recent trip to the Niles Antique Fair with my friend Kathie.

This is a big antique fair practically around the corner from where Kathie lives. It was going to be my first time attending. I read an article Kathie sent me before the fair (to warn me to wear comfy shoes) that said that 30,000 people were expected…and the first thing I wondered was where will everyone park?

We got there early, 7 a.m. is pretty early for me which is why I had to sleep over Kathie’s house the night before. Kathie knew I'd never make it to her house "early" - she lives 25 mins. from me by freeway.


We walked the entire fair, most of it was expensive, but found some goodies, (anything for a dollar is always fabulous). One of the things I love is vintage looking lace, lacey cloth napkins, doilies etc to use in books and other altered projects. So at the fair, I found this booth that had a bunch of it. I asked a customer shopping at the booth if she knew how much the doilies were, and she told me she just grabbed a bunch, took it to the "old man" (pointing towards him) and asked him how much for the bunch. She said he was "giving it away cheap-I don't think he realizes what he has here or doesn't care." So I bring my stash to the old man, start chatting with him and he tells me he has so much of this stuff, and didn’t even bring it all with him. I show him my handful and ask him how much. He starts counting them (that lady didn't make it sound like he would count it lol! Luckily, I already had counted it and I had well over 20 pieces so I knew "my worse case" scenario already). He stopped counting after 10, and said how about $5? I said...ooooh...(sad face)...darn, I was thinking more like $2...(and as I was telling my husband this story, I was endlessly pulling out these goodies to show him, and he gasped, and said YOU DID NOT!) so the old man says, ok, how about $3? I said OK!
Here’s a picture of the bunch of doilies and lace for $3… 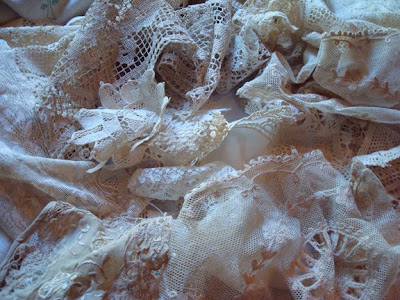 and my favorite find – a little mirrored dresser that sits a little over 2 feet high…have no idea where I’ll put it, but I loved it the moment I saw it… 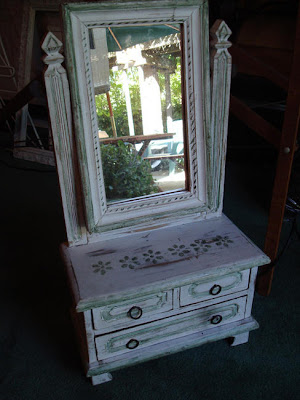 After finishing up the fair, we started walking back to the car and there are lots and lots of garage sales going on. We thought the garage sale portion was mostly the day before. Boy, were we wrong! It was INCREDIBLE! Nearly every house was doing a garage sale! It was like trick or treating at every house on the block, except we had to pay a little for our candy!

We’re finding lots of fun stuff, and then, we find this house with stuff all over the tarp on the ground -and some stuff on the table. The stuff I wanted was on the table - craft stuff. So I find two baggies filled with little laces and crocheted pieces -- PERFECT for my scrabble tiles, altered books, etc. oh so pretty....so I ask the lady walking around in a pocketed apron, "would you take a dollar for these?" and she said, oh, those aren't mine...you'll have to ask "her" --as she points upwards towards the raised porch and there, leaning over the rail watching over everything, is a very
sweet, yet fragile looking elderly lady.

So I head over to the elderly lady, (Kathie in tow...I think she is dying to know how much I'm gonna get this little bit of treasure for) and I hold out my cupped hands filled with the two little bags of treasures, 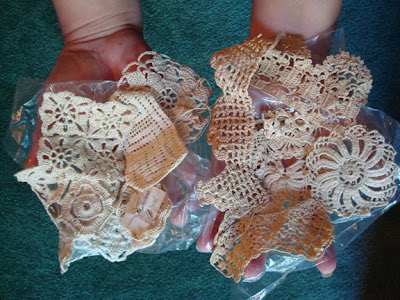 and again, I ask: Would you take one dollar for these? and the little old lady looks in my hands and says...in the DEEPEST, LOUDEST, GRAVELIEST VOICE - EVER!....

OMG, first of all I was so SHOCKED I think my whole body jerked! I was sooooo NOT expecting that response…and I'm certain my eyes bugged out too...seriously? How could THAT voice come from that sweet little old lady?!! I just stood there...startled...and thought OMG I'VE OFFENDED HER! And then she continued again...in that same DEEP, LOUD and GRAVELY VOICE...

NO! You're not gonna pay a dollar for that! mmmmyyyy gosh! those are only PATTERNS! they aren't even a-n-y-thing! they're just little patterns! little patterns I made! Just give me five cents!

and I was still standing there...shocked, because it took a second to process that she said "five cents" I was still focused on that very harsh NO! and the tongue lashing I was certain I was gonna get for offending her! So I just stood there...frozen...my arms still outstretched and hands cupped...the only thing that turned was my head...slowly...towards Kathie... only after I finally processed that she only wanted a nickel…and I nervously, quickly, yet also stammering, said to Kathie:

KATHIE??? Do you have a nickel? Please give the lady a nickel...I don't have a nickle... (the smallest thing I had was a dollar...NO WAY was I gonna even ask the lady for change and I just KNEW that if I tried to give her a dollar and tell her to keep the change, that the Deep...Loud...Gravely and Harsh voice would return!)

And as soon as I said "KATHIE"-- Kathie quickly started fumbling and digging in her bag, as she said in a startled voice as well...ummm...yes - a nickel! I'm sure I have a nickel! as she dug into her bag...I swear it was like a scene from the Wizard of Oz...both of us trembling trying to do as commanded by that DEEP...LOUD...GRAVELY AND HARSH VOICE!
Finally, after what seemed like an eternity as I still stood there, frozen, arms outstretched, Kathie produces the nickel - holding it up in the air as if she had just produced the golden ticket. I hand the nickel over to the lady who leans over and plucks it from my hand! I immediately say THANK YOU! and we both scurry away -- and if we had tails, it'd be between our legs for sure! It wasn't until we were AT LEAST three or four houses away did we start BUSTING UP! laughing and repeating in that deep...loud...gravely and harsh voice...NO! I WON'T TAKE A DOLLAR! I WANT A NICKLE!

We left shortly thereafter…we were exhausted. As we left the very, very large neighborhood, we realized we had just touched the tip of the iceberg…the door to door garage sales went on for what seemed like miles! But we were out of both money and energy! What a fun day!
Posted by Christine Delgadillo at 4:51 PM

Good job Miss Christine! Maybe we can help motivate each other! Thanks for leaving the comments today!

Awesome to see you back to blogging :)