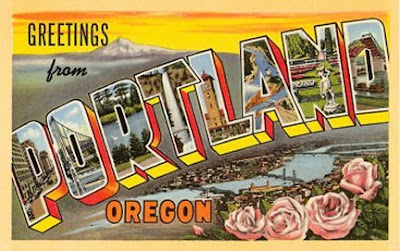 I’m headed to Portland, OR today to make Pretty Little Things with Sally Jean. Or, since I’m in the halloween mood, maybe a few spooky little things too!
Posted by Christine Delgadillo at 8:36 AM 2 comments:

At the birthday crop last Sunday, I brought my recipe pages to finish up for Michelle's swap. Hayley at ACharmingPlace was hostessing a Halloween ATC swap, so I also brought some halloween papers and embellishments with me. If I had time, I was going to make a few ATCs and then join Hayley's swap. I know, that's backwards...you are supposed to join the swap and THEN make the ATCs, but I wanted to see if I was going to get into making Halloween ones or not before I committed to it. Well, I got two done, and I was really feeling into it! So, I went online to join the swap but it was already full! Oh well, he who hesitates...

Well, I just couldn't stop making those little ATCs, so I ended up making ten of them. And each and every one of the ATCs has a charm on it from ACharmingPlace. I colored some of the charms with black ink and there's an arrow in there that I colored a purplish color using Primary Elements. One of my favorites is the "Boo-tiful Ghosts" ATC. On the middle and right ghost, I cut this filigree charm in half, bent it a little, and turned it into a "crown" for the ghosts. For the ghost on the left, I cut the sides off this flourish charm and used it for a crown too.

Since I missed joining the swap, I've decided I am going to use the ATCs as embellishments in a Halloween book I am going to make. I even went to Scrapbook U today and bought some new halloween papers for the book. Now all I have to do is make it!
Posted by Christine Delgadillo at 10:38 PM 4 comments:

It's nice to know you're out there...

Apparently, Raquel has been watching my blog (there’s one more for your name count Raquel) and told me one day that "Joy" always comments on my blog. I told her, "Yes, Joy is a sweetheart." Whenever I go to Joy’s blog, I always leave a comment on her blog too. But the truth is, I too look at blogs and rarely comment on them. So it is really nice when someone tells me they saw "such and such" on my blog. It let’s me know someone is out there reading this thing.

Last week, one of my friends told me that she saw my dragonfly ATCs on my blog, and that one of them had that special word that she likes so I decided to make one for her too.

So tonight, I took out my Primary Elements, my transparencies, glitter and my dragonfly stamp and got ready to make those little dragonflies. Well, I went to squeeze out just a tiny little bit of the medium, but instead a WHOLE bunch came bursting out onto my craft sheet - oops! What a waste! I almost wiped it up with a papertowel to throw away, but instead decided to just throw a bunch of the primary elements into it and do a "Tim Holtz" type technique and "swooshed" a few ATC cards into the puddle on my craft sheet.

So now I have a few pretty cool backgrounds for ATCs. I just have to figure out what I am going to put onto them. 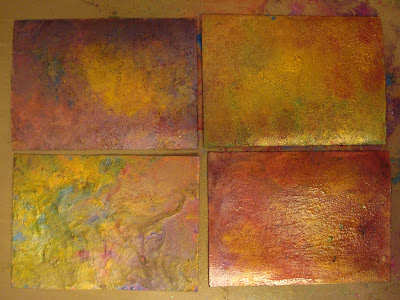 And after that, I did get these two dragonfly ATCs done for my friends that I will surprise them with...unless they come back and see this post! And I am going to send a little something to Joy too for always commenting on my blog. And for Raquel, I gave her a vegetarian lasagna. 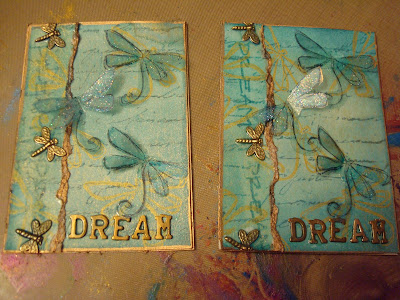 While I was at the birthday crop yesterday, Raquel picked up Kathryn and took her on a photo shoot at Stanford University. If you have seen my previous attempts at trying to get Kathryn to smile for her school pictures (here and here), then you must know that I am absolutely ECSTATIC that Raquel did such a fabulous job getting pictures of Kathryn...smiling!
Posted by Christine Delgadillo at 9:53 AM 4 comments: 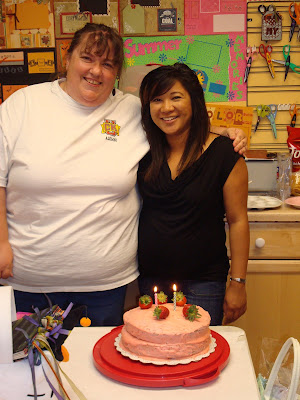 Today was a Drama Queen birthday crop for birthday girls Leilani and Michelle. Michelle loves cupcakes and Leilani loves owls so you can imagine some of the gifts they received. I’ve never seen so many different owls and cupcakes in my life!

It was such a fun day! And, I actually cropped instead of just gabbing all day!
I made a quick card for Leilani, did a bio page and 10 recipe pages for the swap (which was due today).

For my birthday crop, Michelle made me such a fabulous birthday cake. There is no way I could ever make her a cake anywhere near as nice, nor would I want to try! (I was so thankful that Veronica made her a delicious strawberry cake!) So instead, I made a vegetarian lasagna and made Michelle a faux cupcake (which was my birthday card to her). That cupcake was so fun to make and Michelle seemed to enjoy it too.

Here are some pictures I took as Michelle opened her cupcake. (You can click the picture for a larger view.) 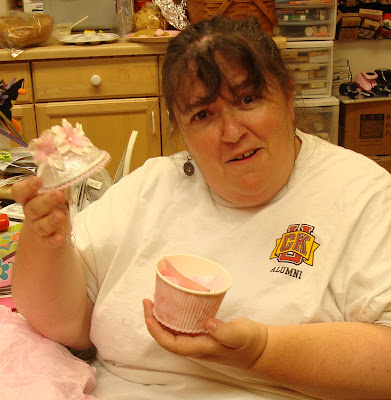 I love this expression on Michelle's face when I told her I made it from a yogurt container.


Here's a closer look at the faux cupcake. When the lid is lifted, the birthday wishes dangles. The charms are from ACharmingPlace. 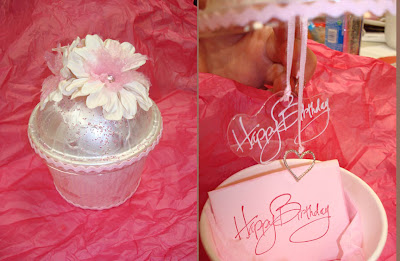 And here are the goodie bags that Michelle and Leilani gave all of us...including a new stamp that Michelle had signed by Tim Holtz just for her Drama Queens! 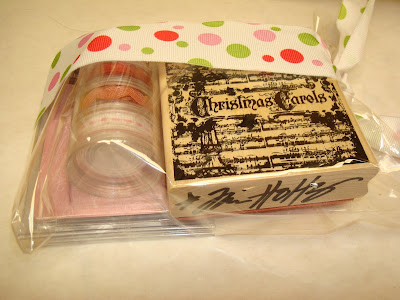 Since retiring, I have been making dinner nightly, trying to cut-back on fast food and eating out. But today was one of "those days" and I just didn’t want to cook. In fact, I just wanted to have a nice big strawberry margarita! Kathryn went to a Maroon 5 concert with a friend, so it would be just Jose and I for the evening. So when Jose called to say he was on his way home from work, I told him, "We’re going out, and I’m having a margarita!" He laughed and said, "I don’t know what has happened today, but ok!"

I’m so glad we went out. It was a night filled with laughter, mostly on my part, and that was before the margarita ever arrived! The reason for the laughter...the realization that "my old man" has developed "old man" tendencies! Repetitive complaining about something that bothers him, and by-golly, he’s gonna tell you about it! What bothered him at the restaurant? The lighting!

As soon as we arrived, it started, nonstop:

Why is it so dark in here?

This isn’t a romantic french restaurant, it’s The Outback! There should be a little light in here!

They could at least have a candle on the table to make a little light."


The more I giggled, the more complaints he came up with. He even looked across the way from us and saw an elderly man and commented, "I’ll bet he couldn’t see the menu either! Next time we are going to Denny’s! I can see the menu at Denny’s!"


I was giggling at hearing the continuous complaints that he couldn’t read the menu. But I nearly lost it when Jose continued to complain but this time to our waiter! He even suggested a dimmer switch to the waiter! And even asked "don’t you have a flashlight?" By this time, I was no longer giggling, but just outright laughing out loud. I couldn’t believe he was actually complaining to the waiter about the lighting! Thankfully, even the waiter thought it was funny after Jose suggested a flashlight. And I about lost it completely when the waiter produced a key chain flashlight from his pocket and handed it to Jose!

It was so ridiculous and hilarious, I had to take a picture of Jose trying to read the menu (and paying the bill) by flashlight. And when I thought it couldn’t get any funnier, Jose looks at me and laughs after I took the picture and said, "And what’s so funny? You know YOU can’t read it either!" BWAAHAHAAHA! It’s true! I couldn’t read it either, but I didn’t complain or ask for a flashlight!

I thought I would write a little bit more about my daughter Raquel, especially since Angela told me at Stamp Club that she read my blog and thought I had two children, not three!
This year Raquel had a booth at the Santa Clara Art and Wine Festival
to promote her photography business, Life Stages Photography. She did such an awesome job. This is one of my favorite shots she took.
It was exciting to see people lining up to try on the various costumes to get their picture taken. Raquel was so organized for the event. I got these couple of pictures before my battery went dead.
Raquel sets up and takes the pictures. Jennifer (Raquel’s childhood friend) shows the customers their pictures, and if they like what they see, Jennifer collects the money. Kathryn did the computer work for the order and prints it out. Kathryn really did a great job too. She was so concentrated on her job and she kept up with the fast pace. What a great event this was.