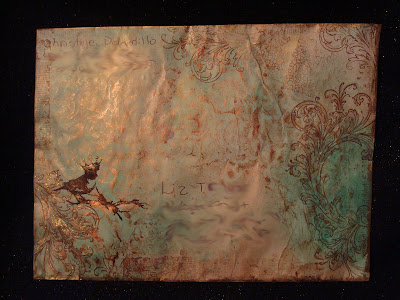 Here’s the "mail art" I did Saturday...very last minute...so last minute that I had already sealed it and wrote the address info on it (I’ve blurred that info on the pictures), and was getting ready to put on the postage when I realized just how big and "BLAH" it looked! I’ve been playing with my glimmer mists, so any white surface just screams out, "spray me, glimmer me, make me pretty!" So I carefully unsealed the back of the envelope, grabbed three colors of glimmer mist (patina, copper and gold) and started spraying away.
I recently watched Heidi Swapp’s glimmer misting magic video (here)
where she put her glimmer mist stencil on top of the glimmer mist (instead of on top of a bare surface and then glimmer misting over the stencil), put a paper towel on top of the stencil and then brayered over the paper towel. It made the glimmer under the stencil look darker because some of the color was absorbed by the paper towel. I really love that effect.
So I pulled out my large glimmer screen scroll, placed it on top of my glimmer misted envelope -- placed a large tissue (deli tissue) on top of it instead of a paper towel (because that’s what was closest to me at the time...I told you this was impromptu!), and went to reach for my brayer which I THOUGHT I had put back into its proper spot (remember, I was cleaning earlier), but no, it wasn’t there! So I grabbed the jar of modeling paste that I had been working with earlier and used that as my "brayer". I removed the stencil...nope, it did not look like Heidi’s scroll stencil...so I tried again. I misted a little heavier, took my "brayer" to it, plus I pressed down on top of the stencil with my fingers to help make the impression. I lifted the stencil and it still did not look like Heidi’s, but I was definitely liking the effect I was getting! I could see swirls, but not so pronounced, and it gave a nice, subtle background effect (click on the image to make it larger)...I liked it...and my "tissue" paper was pretty as well :)
Jose was headed to the mall with Kathryn shortly, and he was going to take this piece of mail with him. I had promised Liz I would get it in the mail that to her that day. By now, my envelope was quite wet so I hurriedly took the heat gun and started drying it, front and back. Of course, some but not all, of the color had soaked through to the back of the envelope, so I sprayed the white spaces on the back as well and continued heating until the whole thing was dry. Then I grabbed my swirl and text stamps (by Tim Holtz) inked with Versafine Sepia and stamped the edges of the envelope. Then I stamped the bird on the branch and the crown (both from Tim Holtz’ acrylic set sold at Michaels) with Versafine Onyx Black ink. I very lightly scribbled (so it would dry quickly, especially with the help of my heat gun) Diamond Stickles on some of the swirls and on the crown tips too. I used my gold Krylon marker on the outside edges of the envelope. When I went to seal it, the back looked pretty but needed some stamping too, so I grabbed an assortment from my stamp wall and quickly stamped away -- no time for thinking...just stamp! Here’s the back of the envelope. 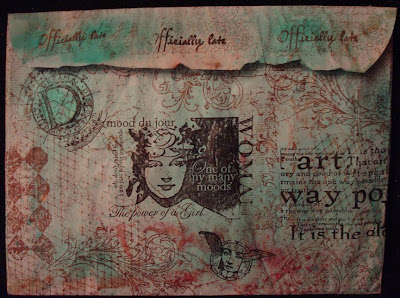 The whole thing took about 10 minutes -- and I finished just in time to put the stamps on and hand it to Kathryn to take to the mall for mailing. She’s so sweet...when she saw the envelope she said, "I bet that’s the prettiest envelope the post office has ever seen!"
So Liz should be receiving that envelope today—I hope she likes it. In addition to the things I needed to send to her, I also sent her a card I made and the "Smile" ATC that I posted yesterday. Liz has taken some classes from me and always sends me such sweet and inspirational emails after class. She also brings me the most amazing origami art made from money as "thank you" gifts. Here’s an origami starfish she made from a $20 bill (there’s no way I’m taking that apart!) And the paper mold fish card is adorable . 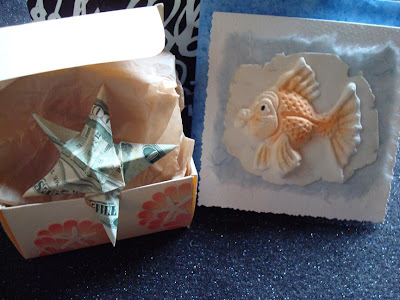 Liz told me she made the fish card a long time ago, back in the days when she was feeling creative, and now after taking a class from me, she said she was feeling creative again! That little bit of information was the greatest gift to me!
And the other two ATCs I posted yesterday...I'm going to give the "Dream" ATC to my friend Veronica...that’s "her word" that she occasionally lets me "borrow" heehee (it’s one of my favorite words too, along with Believe, Wish, and Inspire...ok, so I have many favorite words!)
I still have the "Relax" ATC, so if you’d like it, just leave me a comment, and I’ll get it to you.
Posted by Christine Delgadillo at 10:07 AM

it's beautiful christine. i need some mail from you too. lol.

You are so creative!! Love your mail art. I need to do that next time I mail something.

Leah here, :D that is awesome! you are becoming very inky my friend! LOL

You totally rock! Will be watching my lil old mailbox here in Champaign---think of it as a test since I'm so far away! audrey