"Before" and "After" Pictures of My "Thong" 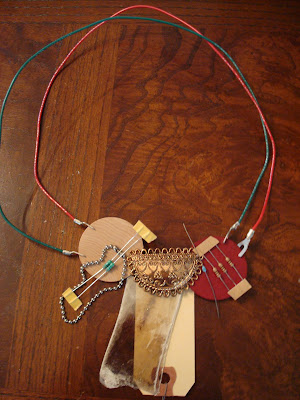 Remember this "before" picture of "my thong"? You know, the "weird stuff" that was sent to me for the "thong" challenge I posted about HERE?
Well, here’s the "After" picture of what I made from the "weird stuff." The industrial green and red wires, mica, tag, ball chain, wooden circles, and resistors were all incorporated into this layout. 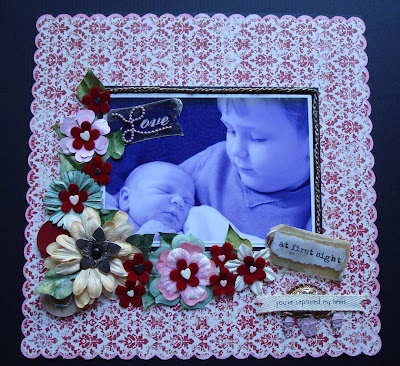 When we do these challenges, everyone tries to disguise their "style" and anything else (like backgrounds) that might give your entry away. I haven't made a "12x12" layout in forever, so I thought now would be a good time. And it was so hard not to add distress ink to anything--which is something I always do. I also didn't want to use a picture of my own kids, so, a big thank you to my friend Ruth for letting me use the picture of her beautiful grandchildren for this challenge!

I used everything that was sent to me...and here’s what I did to the stuff. 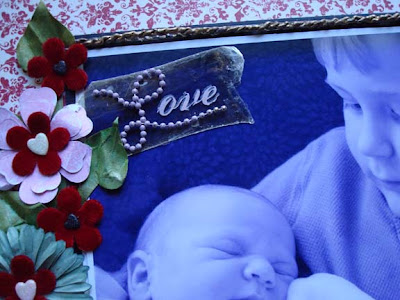 I twisted the industrial red and green wires together and then put them through my paper crimper. They were still ugly so I colored them with alcohol ink and a gold Krylon pen and used it as a frame for the picture.
I painted the ball chain pink, formed an "L" with it and adhered it with Glossy Accents to one of the mica pieces, which I had peeled and split into three pieces. 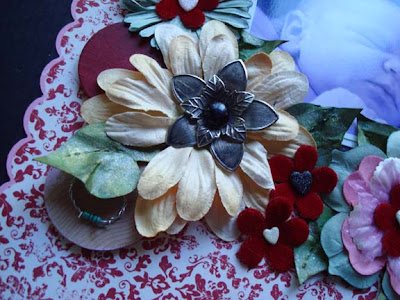 For three of the resistors, I formed a circle with them and placed it on top of one of the wooden disks. Both disks were added to the bunch of flowers.
I added my own junk to the layout...the metal flower center is from a pair of earrings I got at an estate sale for $1.00. 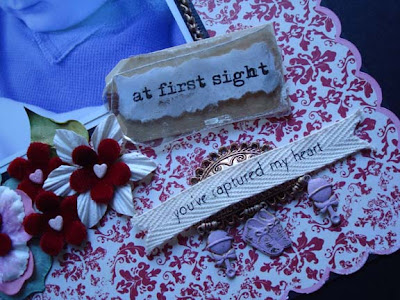 I sandwiched the typed words "at first sight" between the remaining two pieces of mica and layed it on top of the tag that was sent.
The other three tan resisters were used to hang three painted baby charms from ACharmingPlace.com from the loops of that big ol’ button I received. I covered part of the button with printed twill because it was kinda ugly!
And here’s what the eleven other creative ladies did with their "thong" — so fun and so much creativity!

Posted by Christine Delgadillo at 1:07 PM

LOL!! great slide show!! and I didnt even realize that "cable" outlining the frame as the red and green cables! LOL

Christine totally fooled me! I know she doesn't do layouts, not since I've met her, so in now way that was hers! snicker! but wow! now she showed me how great she can be, there's nothing this girl doesn't do awesome!!!!!!

It is so beautiful!! I knew it was yours and that cat hair (AKA the button) confirmed I was right!

just stopping by to say hi!